The first Spanish UNESCO site to be ticked off the list is Santiago de Compostela, a city which is a famous pilgrimage site, and is considered one of the holiest cities of the Christian faith.  Santiago was constructed around the tomb of St. James the Greater in the beginning of the 9th century. The city was destroyed during the struggles between Islam and Christianity at the end of the 10th century, but was quickly rebuilt over the course of the proceeding century.

The route of the pilgrimage, and a little about the UNESCO site can be viewed in the video below: 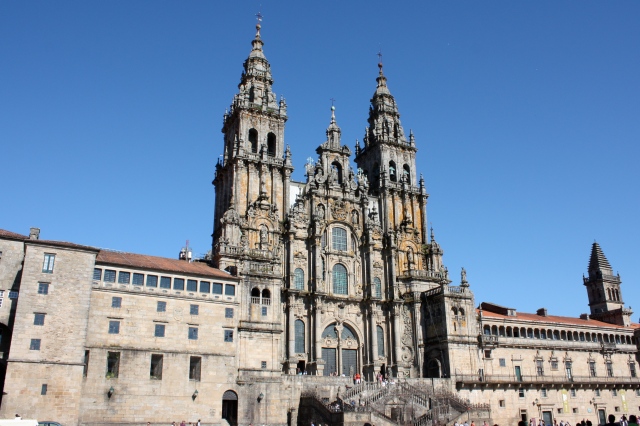 The Cathedral of Santiago de Compostela

The impressive cathedral (Santiago’s third known cathedral) towers above most of the cities architecture and is visible from a great distance. The original Romanesque cathedral was built in 1075 and has been subject to successive alterations and additions from various architecture styles.

The interior was just as impressive. On entrance to the Cathedral we realised Mass was taking place (in Brazilian Portuguese), and so decided to explore elsewhere in the cathedral. We later returned to main part of the cathedral and the large congregration had moved out into the main square and took part in some sort of celebration (see below). Interestingly, confession could be sought in Spanish, Portuguese, Italian, French, German or English, catering for the wide variety of visitors that make the Pilgrimage to this site.

There was a fantastic atmosphere to the area. It was fascinating to walk around a medieval city, filled with impressive and meticulously detailed architecture, and a multitude of nationalities (as we left the cathedral a large group of Mexicans – complete with sombreros – entered the cathedral in procession while singing and dancing), and a very jubilant atmosphere.